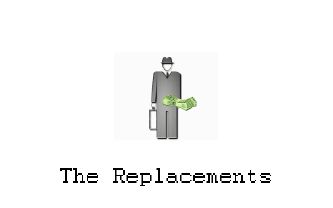 The following are the regular season games The Replacements played. Playoff and exhibition games are not included.

The Replacements have had varied success during their regular season play but have traditionally had good success during the playoffs. The Replacements have reached the playoffs every season since its formation and have advanced at least to the sweet 16 in 6 out of the 7 appearances with the only exception is when they lost to the eventual champions in the second round in season 5.

First Round: 111-101 win over Snap Attackerz
Second Round: 129-113 win over Franchise Underdogs
Third Round: 107-104 win over Oklahoma State University
Fourth Round: 106-98 loss to Fighting Mongooses

Retrieved from "https://courtrivals.fandom.com/wiki/The_Replacements?oldid=3882"
Community content is available under CC-BY-SA unless otherwise noted.